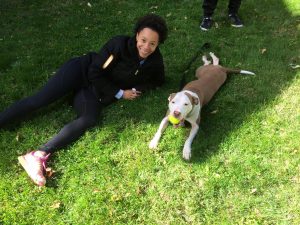 Pit bull stigmatization presents challenges and consequences for both pit bull type dogs and their owners. Pit bull dogs spend more time in shelters – where they are at risk for poor welfare and higher euthanasia rates – and their owners often experience housing and insurance restrictions as well as stigmatization. Although these consequences are well documented, little research has explored where they may come from.

Many members of the public have been exposed to pit bull type dogs through news articles about dog bite-related incidents, including fatal and non-fatal incidents involving humans or other dogs. News articles discussing pit bull type dogs have often emphasized their alleged strength, aggression and unpredictable nature, which may have negatively influenced how readers consequently perceived pit bull dogs. It is further possible that the media’s presentation of pit bull dogs has fostered a negative construct that is triggered by dog bite-related incidents. Thus far, no studies have explored how people’s knowledge of pit bull type dogs – obtained through personal experience, conversations, or media exposure – affects their perceptions of personality and blame in a dog bite scenario. I believed that a mixed methods approach could provide a deeper insight into the public’s perception of pit bulls, the current state of the negative stigma about pit bull type dogs, and where this stigma might originate.

Using an experimental design within a survey, the first part of my study explored assumptions and blame attributions made about a dog involved in a bite-related incident in the absence of breed information. I further examined whether these assumptions and attributions were influenced by breed stereotypes of pit bull type dogs. I hypothesized that most participants who were not given breed information would perceive the dog similarly to participants who were told the dog was a pit bull mix. In the second part of my study, I used in-depth interviews to explore what factors and/or experiences relate to the way people perceive pit bull type dogs’ behavior and personality.

Although my data were not significant, the study revealed that the narrative of pit bull dogs as fighting dogs carries a significant amount of weight within my respondents’ current perceptions of these dogs. It also showed that positive encounters with pit bull type dogs and exposure to positive advocacy can improve people’s opinions of pit bull dogs in general. This provides validation to advocacy organizations’ efforts to disseminate positively biased information regarding pit bulls and provides some support for the use of ambassador dogs for this breed type. While the pit bull may not ever shed its dog fighting narrative, perhaps advocacy organizations could work with the media to increase the public’s exposure to positive information and representations of pit bull type dogs to undermine automatic breed stereotypic beliefs expressed by the public. 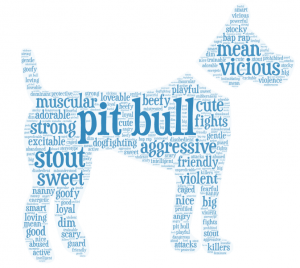