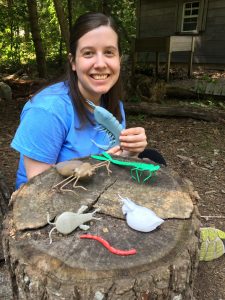 Alternatives for learning about wildlife in captive settings

Learning about animals plays a major role in children’s science education, and it is very common for these animal-related lessons to be reinforced by visiting wild animals in captive settings. However, there is concern about the welfare of animals in these settings, and there are conflicting viewpoints as to whether the educational gain outweighs the welfare concerns. By viewing animals in unnatural enclosures, not only do children, and the general public, not get to experience the animal in its true essence, they do not get the hands-on experience that is so impactful to the learning process.

The purpose of my research project was to compare the educational outcomes of a children’s pond life program where children experienced either a traditional live animal observation session, handling realistic animals models, or interacting with the animals in their natural habitat.

I worked with summer campers between the ages of 5-8 years old to measure changes in their knowledge of and attitude towards the pond as a habitat and several species of freshwater macroinvertebrates that are commonly found there. This study tested the hypothesis that the alternative hands-on learning experiences, the animal models and natural habitat activity groups, would be at least as effective in changing children’s knowledge and attitude towards pond life as the traditional live animal observation session. The hypothesis was supported by the data, and the findings contribute to the existing literature by suggesting other methods for producing educational wildlife experiences that people can enjoy without compromising the welfare of animals.

TIHAI is grateful to the Department of Mechanical Engineering for supporting Jess as a STEM Education Scholar.