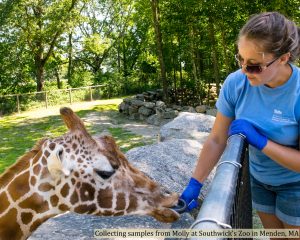 Modern zoos sponsor a variety of visitor-animal interaction in the hope that it will foster positive environmental and conservation-focused behavior towards wild populations. Animal encounters are incredibly popular with the public, but there is limited published research on the impact of these encounters on the animals used.  While many types of animals participate, research on the welfare impacts of this interaction has not addressed the same range of species. There is a need to better understand the welfare of popular species for interactions. Giraffes were chosen for this research as they are often used for feeding encounters with the public; an internet survey of the 232 currently accredited AZA institutions in the United States found that 73 offer some type of giraffe encounter program. Although they appear to have high popularity, little is published about the impact of encounter programs on giraffes. In fact, little is published on how to measure their welfare outside of behavioral observations based on wild populations. It is important to conduct research to better understand the effect of visitor interactions with these animals who regularly interact with the public.

There is published literature exists on giraffe welfare, but it mostly focuses on the absence of negative welfare indicators, such as non-purposive repetitive behaviors, or stereotypies. Welfare has focused on the absence of ‘bad’ behavior, but little is published on what ‘good’ welfare might look like (and welfare is more than the absence of ‘bad’, it should consider the presence of ‘good’ as well). Gaining information on what positive welfare looks like in giraffes would be a time-consuming process; instead of conducing behavioral observations, speaking with individuals who work closely with giraffes could generate the same information. 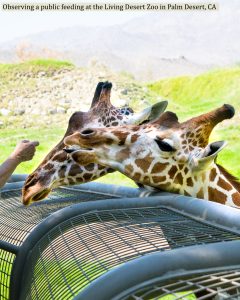 Zoo keepers, and other professionals who work closely with giraffes on a regular basis, often use behavioral observation as a part of their typical routine to check up on the animals they work with. The knowledge they have from making these observations during their careers can be accessed to gain a better understanding of how they evaluate the mental state of the giraffes they work closely with. This information can then be used to identify potential pro-welfare behaviors in this species.

Recruiting and speaking with giraffe experts is currently ongoing, but interviews have already been conducted at the Living Desert Zoo in California, the Detroit Zoo in Michigan, and the Roger Williams Park Zoo in Rhode Island. Preliminary information from the interviews underscores the knowledge that the individuals who work closely with these animals have. Not only has there been a vast amount of information shared, the concern and care for the conservation of this species as well as the importance of the individual animal has been regularly mentioned.

Creating a collection method and standard protocol for giraffe saliva

Working at two separate locations during the summer and through the late fall, a protocol to collect saliva from giraffes was developed and tested. Saliva was collected to analyze for the hormone cortisol, which can indicate an individual’s stress or excitement level. Cortisol levels in saliva will respond to a stressor after about 30 minutes, making this ideally suited to evaluating a reaction to visitor interactions. The original study design was to use these salivary cortisol measurements to directly evaluate giraffe feeding encounters, but the difficulties involved with collecting giraffe saliva quickly became apparent and this portion of the study was refocused.

Thanks to collaborating with Dr. Kathleen Morgan and Southwick’s Zoo in Menden, MA, a collection method for giraffe saliva was created. Difficulties included getting close enough to human-shy animals and loss of saliva through evaporation, but by the end of November samples were successfully collected using two methods. For giraffes who were less wary of humans, saliva was collected by direct contact of the saliva swab with their mouth and tongue. For the shyer animals, saliva was collected indirectly by swabbing it off leaves and branches. Samples were sent off for cortisol analysis at the St. Louis Zoo’s endocrinology lab, and both sampling methods produced viable cortisol results. 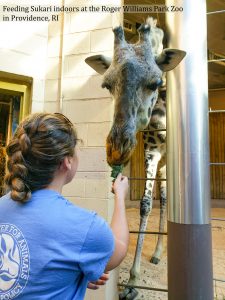 The collection method created at Southwick’s Zoo was then tested out at the Detroit Zoo, to determine if this was a realistic method for collecting saliva at different locations. Saliva was successfully collected and analyzed for cortisol from Detroit, and the samples are currently being processed to try to validate a standard curve for giraffe saliva.

How did your project impact your experience at Tufts?

The chance to conduct my own research was a daunting but very rewarding opportunity. I entered the MS program at the Center for Animals and Public Policy with the goal of pursuing this type of research for a career, and I feel even more prepared now to do that. It has helped me to focus my area of interest—before I wanted to research behavior, enrichment, and stereotypy, but was also interested in Human-Animal Interactions. If I had not had the chance to design my own study I doubt I would have ever found out about visitor-animal interaction research in zoos. This is an area that I now feel very passionate about and hope to pursue further into a doctorate career.