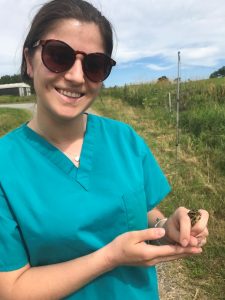 Soil, children, and wildlife: The cycle of lead in the urban environment

Lead (Pb) is an inorganic, heavy metal and is naturally found in the environment, including in air, soil, and water. Industrialization has increased the amount of heavy metals like lead in the environment. The historical use of leaded house paint and leaded gasoline is an important source of lead exposure in humans. Historic, urban cities like Boston have seen a large number of children in the last few decades exposed to lead. Although lead in paint and gasoline has been banned (in 1978 and 1996 respectively), and therefore the number of children with lead poisoning has decreased, lead from these products can still remain in the soil. Lead exposure from any source is associated with adverse health outcomes in virtually all species – humans, pets, and urban wildlife. This project consists of three factors:

This project focuses on human-animal interaction due to the complex cycle of lead in the urban environment, and because lead poisoning is of significant concern for wildlife, in addition to humans. My past research has shown that house sparrow populations are less common in areas with a lower risk to lead exposure, and that house sparrows specifically tend to frequent high risk areas. Thus, house sparrows and other urban wildlife may have public soil as their primary source of exposure. Being chronically exposed to lead could impact their behavior and reproduction as lead is known to affect both of these in humans and other non-human animals.

In addition, this project is unique in that we are using humans as sentinels for animals. In Massachusetts, it is required for blood lead levels to be routinely collected and reported for all children 3 and under. This large database offers the opportunity to find associations between children, animals, and their sources of lead exposure.

Though we are currently still investigating our questions, we have preliminarily found significant associations between soil lead levels and children blood lead levels: as the level of lead increases in soil, it becomes more likely that children in that area have elevated blood lead levels. We are looking forward to adding in our house sparrow blood lead levels soon to see if there is a similar outcome!

How did your project impact your experience at Tufts?

This research has added to my growing knowledge of project design and implementation. I have learned how to navigate challenges and changes that occur during this process, which has impacted me the most. Participating in this program and having the ability to conduct my own research has allowed me to grow as a scientist and thoroughly investigate a topic that I have found to be extremely important for the health of humans, animals, and the environment. As a dual-degree student studying concurrently for a Master of Public Health, I look forward to applying the knowledge I have gained over this past summer and in the coming months to my future career in public health, One Health, and conservation medicine.

To find out more about the TIHAI Student Scholars program, visit our program page.